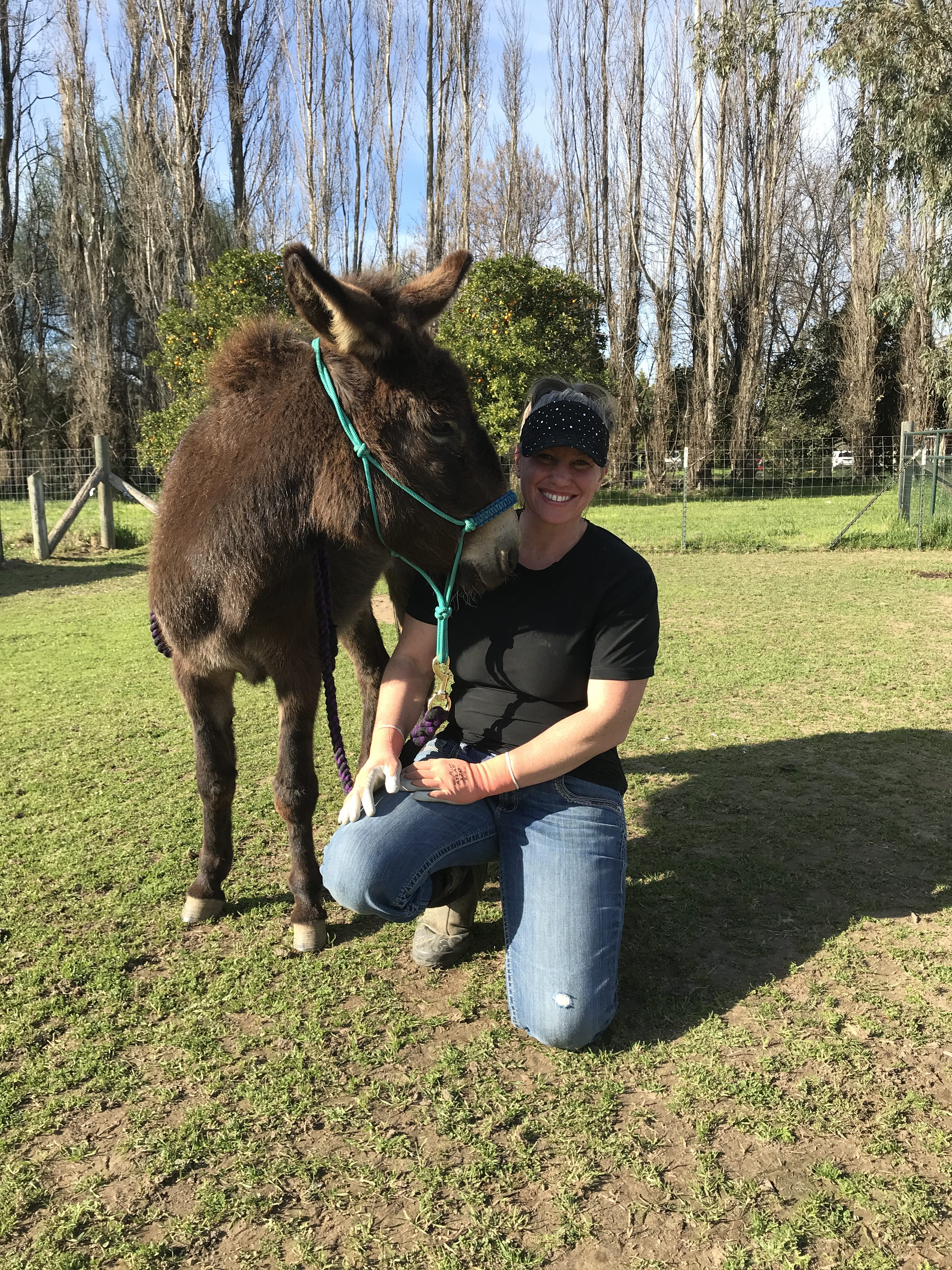 The Fairest Farrier by Far

I have received a discount for my honest opinion of this service. All opinions are my own.

Just a few months ago I didn’t even know what a farrier was, let alone imagine that I would ever need to find a good one. Although I have ridden horses sporadically; I never had to actually care for a horse. When we got our first donkey (Cappuccino) in September I knew she would need hoof care, but didn’t know much more than that. Her hooves had been trimmed at her previous farm with no issue, so I figured the same process would continue and called up the first farrier I could find. He came out and while he was a very nice man, he wasn’t prepared for the tricks Cappuccino had up her sleeve. Cappuccino started out by rearing and pushing me around while harnessed, mainly because I wasn’t using the proper techniques, attitude or process to harness and lead her. Then, whenever the farrier approached her she would thrash about. It didn’t take him long to quit. In hindsight I am glad he did give up quickly. I’m thankful she wasn’t pushed into something that might give her a bad experience and i to work through later on. He suggested I get sedative and call him back out when I was prepared to sedate her. I was devastated. I knew I could do better. I knew I could find someone who could teach me how to take control of my interactions with Cappuccino, while also loving and respecting the magnificent animal she is.

So, how did I find the fairest farrier by far? I’m in a few farm and livestock Facebook groups, mainly to help me learn about my farm animals through reading questions and comments others post. One group member had posted that she was looking for barley straw for her donkey and was wondering if anyone knew where she could buy some. First of all, who knew there were so many types of hay and straw? Before farm life happened to me I just figured there was hay, plain and simple. I did a little research about barley straw and asked the fellow group member why she was looking for it. She tagged Megan Hensley and raved about her, suggesting I check out her FB page. This information and the connection I was able to make with Megan online was about to help me and my donkeys immensely. Soon I found out that she was a farrier and although she lived on the northern coast, she could travel to Smith Farms West someday!

That day came this past Thursday. I had waited through a couple of storms in February in anticipation, eager to learn from her and have the donkeys hooves trimmed. I knew the chance to actually see someone work with and handle donkeys would help me know how to approach, harness, lead and care for them myself. In the months I waited for her arrival I attempted as much handling as I could. Kiwi showed little resistance to my interaction. As long as I was willing to scratch her rear end, she was game for harness practicing. I looked up pictures online of how to properly knot a harness and used sweet Kiwi as my model for endless harness fittings and practice. I think I’ve finally gotten the proper knot down! I would also approach and attempt to work with Cappuccino, and while I had successfully harnessed her once or twice with the entirely wrong technique and approach; she quickly had enough and moved away from me anytime I approached her. It was discouraging. I felt like my once loving and social donkey was changing and my fear was inhibiting our friendship. It sounds hysterical now, but I had visions of Cappy cornering me and repeatedly flinging swift kicks into my ankles and knees. I just knew one day I’d be out there alone, cornered and hollering in the corner of the pen while she kicked away. It was silly, but all I had been told from anyone who had advice about donkeys was to watch for kicks and stay away. Days before Megan’s visit I could barely pet Cappuccino, let alone harness her. I felt defeated but remained hopeful that I would get the training Cappuccino needed me to have.

The day arrived, having Megan come to the farm to train me! The first thing she talked to me about was entering the pen with an assertive and commanding attitude that was both in control, but light and non-threatening. I learned to walk in with the right attitude, void of fear and filled with respect. She also showed me how to quickly recover and forget when Cappuccino pulled stunts or attempted any immature behavior. She gave me strategies for correction in clear circumstances of defiance and then demonstrated how to move on, not take it personally; keep flowing through space with a light and positive attitude. I was in awe as she moved both donkeys into their smaller pen and then performed a cross between a dance and football linebacker moves to command the donkeys’ attention and respect. Quickly, Cappuccino was focused, looking at Megan and understanding the situation. She was harnessed in no time, with no struggle and only positive energy. Megan was able to trim all hooves on both donkeys that day. While Cappuccino’s rear hooves took a little more finagling and training, she eventually loosened up and stopped the flicking kicks she started out with. No sedation, no anger, no force. Kiwi, much older than Cappuccino went with the program beautifully. She soaks up any and all love and attention we could shower on her.

After the hoof trim was over, Megan allowed me to practice harnessing and leading with her supervision and coaching. Her lesson was so valuable and gentle, helping me see that I can do this. Cappuccino isn’t mean, she’s smart and young. She needs someone who won’t let her get away with tricks, I didn’t think I was going to be able to be that person, but now I know I am. Now two days after Megan’s visit, I was eager to practice what I had learned. I went out to the pasture this morning confident and sure I could do it all again without Megan because she had done such an amazing job training me. I did it, what a feeling of success! I was able to put my fears aside, knowing that Cappuccino was willing to give me the same respect and love that I would give her.

279 thoughts on “The Fairest Farrier by Far”